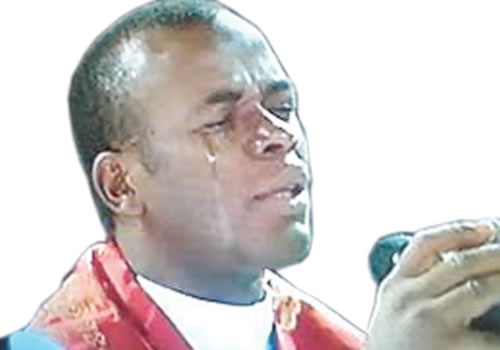 Addressing reporters after their meeting in Enugu, the Forum said the Catholic priest’s message was his personal opinion and not from the inspiration of the Holy Spirit, as he claimed.

Fr. Mbaka had while addressing a mammoth crowd at his Adoration Ministries camp in Enugu on New Year’s Eve, carpeted President Jonathan, saying his “Goodluck” had turned to “Badluck” for the country.

In the highly scathing message, which has since been condemned by fellow clergymen, especially from the Catholic denomination, Fr. Mbaka, who said his message to the nation was divinely inspired, called for change in the leadership of the country and predicted that things will get worst if President Jonathan is allowed to continue in the saddle.

In its response to the message, the Chairman of the forum, Bishop David Eberechukwu, who spoke, said it was not the first time Rev. Fr. Mbaka would make such claims.

He recalled that “In 2003, Mbaka said that then Governor Chimaroke Nnamani would not get re-election and that if that happened, he would remove his cassock. Indeed, Chimaroke was re-elected and up till today, he has not removed his cassock.

“So, his message is just a personal opinion; it didn’t come from the impulse of the Holy Spirit”.

In a 10-point communiqué by the group, read by Bishop Eberechukwu, the forum, however, said for the sake of equity and fairness, President Jonathan should be allowed to complete a second tenure on behalf of the South-south.

“We note that the Southwest occupied the seat of the presidency for eight years, from 1999-2007. It was on the basis of the principle of rotation that the next President came from the Northwest. If the cold hands of death had not taken him away, that occupant would have been re-elected.

“In the light of the above, it is our considered view and advice as Christians and citizens of this country that the South-south be given the same opportunity of a second term. Therein lies political equity, accommodation and stability”.

SOCEF also expressed concern about the plight of Christians in the North as well as “the challenges the nation faces, following the Boko Haram insurgency and political tension.

The meeting was attended by archbishops, bishops and other Christian leaders from the Southwest, South-south and Southeast, including Most Rev. A.N.C. Anikwenwa, Bishop Peter Ogunmuyiwa, Most Rev. Caleb Maduoma, Rev. Felix Ekiye, among others.

No Catholic bishop was in attendance.