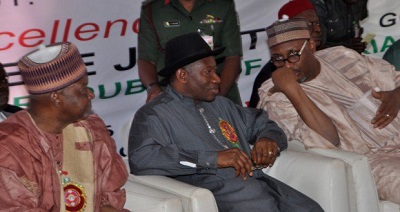 The national chairman of the Peoples Democratic Party, PDP, Adamu Mu’azu, in what might be termed a brutal but frank assessment, identified the “use and dump” mentality of the ruling party as its Achilles heel and called on President Goodluck Jonathan and governors to ensure justice in the party.

According to him, opposition parties have taken advantage of the PDP’s failure to reward its members, who worked for the party, its governors or the president, to swell its ranks.

“Mr. President, I want to appeal to you to consider it a challenge to discuss with your governors, Senators and all elected officials of PDP that members of the PDP should not be used and dumped, adhere to equity, fairness and justice”, Mr. Mu’azu said Tuesday.

The PDP national chairman made this known at the inauguration of the Goodluck/Sambo 2015 Presidential Campaign Organisation in Abuja.

“A lot of our members have left because they have been used and dumped. The membership of other parties, APC, APGA draw substantial members of their parties from the PDP”, he added.

He, however, urged opposition parties to stick to issues during their campaigns.

“We are beating you when it comes to issues. You are only promising the people, but we have already done what you are promising”, he said.