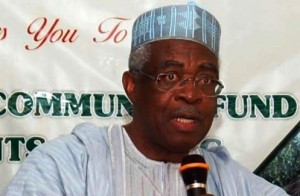 Elder statesman, Chief Edwin Clark, Thursday, expressed disappointment over the call by former Minister of Defence, General Theophilus Danjuma (rtd.), that ex-Niger Delta militants be arrested and prosecuted for warning that there would be war if President Goodluck Jonathan loses the presidential election on February 14.

Clark said Danjuma should have condemned the attacks on Jonathan in several states in the North instead of calling for the arrest of the ex-militants. He wondered why the former army chief would condemn some and not others.

“I read with amazement and indignation, the statement made by Gen. Danjuma, a man I have so much respect for. I always believed that he is very straightforward and courageous and that he can speak to anybody on any issue. I was, therefore, surprised that young men like Asari Dokubo, Tompolo, Boyloaf who they call ex-militants should make statements and instead of him appealing to everybody who has been making such types of statements, he now said that some should be arrested?

“President Jonathan has always believed in one man, one vote and that nobody should die because of him. I went further to say that if it is true that Asari Dokubo and Kingsley Kuku said what was attributed to them, then confront them and not all of Ijaw people. I then went further to ask the speaker that he should be courageous enough to condemn similar statements made,” said Clark.

He noted that a number of northern leaders including Alhaji Isa Kaita, Mallam Adamu Ciroma, Dr. Junaid Mohammed and Ango Abdullahi had in the past made threats against the peace and security of the country before the 2011 elections.

“And in the same vein, they said that they would make Nigeria ungovernable if Jonathan wins the 2011 elections. And they really caused mayhem. My nephew that I trained in the University of Calabar was among those Youth Corps members killed in Bauchi. Where was Gen. Danjuma then? So, why do you now condemn these people? So I think this type of condemnation is one-sided and does not speak well of somebody who believes in the unity of Nigeria.

“Recently, APC said they will set up a parallel government if they don’t win the election. What did Danjuma say? So, I feel very disappointed that he should direct his attention to these men who feel that after the attack on President Jonathan in Bauchi where his security men were wounded and he was attacked in Katsina, something should be done.

“Jonathan comes from somewhere and perhaps that is why these people made that statement and you remember Governor Lamido of Jigawa said that if anyone goes against Buhari, the northerners would regard him as an enemy. For some time now they have been campaigning, when Buhari went to Bayelsa State, he was given a red carpet treatment, and that is the home state of the President. It was the same in Port-Harcourt, the second home of the President. He (Buhari) campaigned throughout the South-South.

“So, why should Jonathan not have the same privilege? And he is the president of the country? Why should his posters not be pasted in the north? PDP governors cannot speak about Jonathan in their place? So, what kind of country do we belong to? Has Gen. Danjuma not been reading about those things?

“I condemn any statement made by anybody threatening the stability of this country. I am not supporting if it is true that they made that statement, they didn’t make it on behalf of us, but Danjuma should be more straight-forward and I respect him because when he speaks, the nation will hear. He should not be biased. Nigeria is Nigeria, nobody is superior to the other, we are equals. If we belong to a country where only one part can make mistakes and it would be condemned, then it is not one country. So, I expect Danjuma to appeal to the northerners to allow Jonathan to campaign in every part of the north,” Clark said.