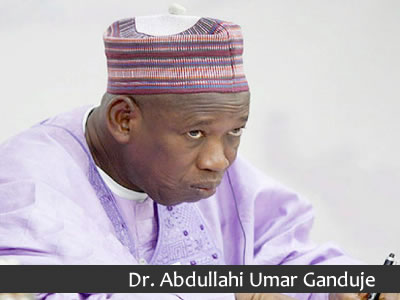 The Kano State Government has promised to ensure that the presidential candidate of the All Progressives Congress, APC, General Muhammadu Buhari (retd.), receives the maximum votes in the state come February 14, 2015.

Speaking to journalists on Monday in his office, the deputy governor, Abdullahi Ganduje, said: “The die has been cast and the battle has commenced in earnest. We are working very hard to ensure that General Muhammadu Buhari secures maximum votes not only from our APC members but across party leaning”.

Mr. Ganduje, who is the APC governorship candidate for Kano, said the state government’s determination to ensure a Buhari win was based not only on party loyalty but because, based on shortcomings in national growth and security, Nigeria had become a “sorrowful state with very shaky foundations”.

He further stated that the current state of the country required somebody with “thoroughbred experience”.

“Nigeria is no longer an issue of party politicking or tribal or religious sentiments”. he said. “You need somebody who is strong enough and resilient in all human perspectives to bring it back to normalcy.

“That is why we are all out to ensure maximum and huge support by giving him the required votes for Buhari to make it to the Presidency because we believe he will fight corruption and injustice. He will bring back the rule of law and practice of sincerity in national dealings”.

The deputy governor urged Nigerians not to allow “their last chance of bringing back their greatness” to slip out of their hands.

He urged the people to vote for Mr. Buhari so once more Nigeria would be great in the eyes of not only its citizenry, but the global community.