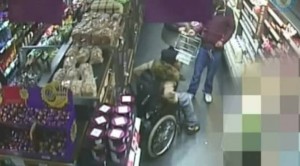 The British police has released a CCTV footage of a woman recorded standing up from her wheelchair and walking around a store while shoplifting. UPI has full detail:

West Midlands Police said the woman came into the Marks and Spencer food store in Coventry, England, Jan. 11 with a male accomplice pushing her around in a wheelchair, but the security cameras caught her getting up from the chair to conceal items under her coat.

Police said the man also took items from the store, concealing them in the woman’s backpack.

Investigators said the method employed by the thieves, who made off with about $90 worth of packaged meat, was reminiscent of Andy Pipkin, a character on cult TV series Little Britain who is known for faking disability.

Police said they are hoping the video will lead to tips from the public to help identify the suspects.