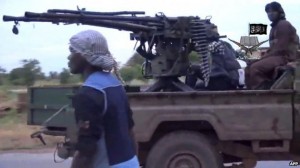 At least, 82 persons were killed on Sunday, as members of the terrorist sect, Boko Haram, attempted to invade Maiduguri, security sources have said.

Breaking down the number of dead persons, Thisday quoted security sources as saying, not less than 70 insurgents were killed, while 10 civilians and two insurgents were felled in the attempted invasion of the town, the second in the last seven days.

The insurgents had tried to take Maiduguri, about a week ago, using the Damaturu-Jimtilo axis, but they were repelled by soldiers who deployed massive artillery and fighter jets to dislodge them. 65 deaths were recorded.

Sunday’s attack began at about 3 am, when the heavily-armed gunmen attacked the southern edge of Maiduguri, setting off explosives as they tried to enter the city, several residents said.

Troops backed by vigilantes repelled them, but they regrouped and tried to take the city from the Eastern end, where they were again stopped.

Defence Spokesman, Chris Olukolade said the assault on the town was “contained” and that “the terrorists incurred massive casualties.

“The situation is calm as mop up operation in the affected area is ongoing,” agency reports quoted him as writing in a text message.

Security sources said that 50 insurgents were killed in Dalwa, about 20 kilometres from Maiduguri, where the battle was fiercest. About 20 others were killed in other parts of the town where the terrorists also attempted gaining entrance.

It was also gathered that though the number of soldiers lost in the attack might be more, two were reportedly killed and had been conveyed from the battlefield with five seen seriously injured.

The latest attacks on the town were said to have been at four major points of entrance: Ngom, Dalwa, Molai and Jawuri.

The extremist group was founded in Maiduguri, the city they are trying hard to take over, more than a decade ago.