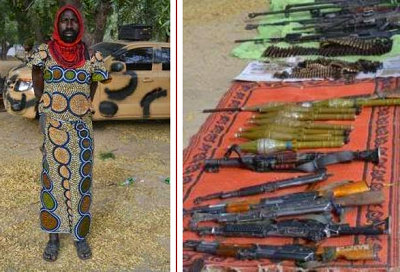 The Nigerian military has said that the on-going search operation in the re-captured town of Baga in Borno State, has revealed that some terrorists disguised as women just as the Nigerian Air Force continued its air raids on identified targets in Gwoza, Bama and Sambisa forest.

The Defense Headquarters in a statement signed by its spokesperson, Major-General Chris Olukolade, said troops also discovered arms and bombs hidden in various locations in Baga.

Part of the statement reads “Meanwhile, in furtherance of the mission to clear terrorists from all their enclaves by the military, the Nigerian Air Force has stepped up its air bombardment of identified targets in Gwoza, Bama and Sambisa forest, preparatory to other phases of the mission.

“The air strikes have been highly successful as they achieved the aims, hitting vital targets with required precision. Terrorists are now in disarray as they scamper to escape from the impact of air bombardment of their locations in the forest.

“Having successfully liberated Baga where the terrorists have been marauding, the troops’ attention has now been focused on consolidation of the security of the area to pave way for return of citizens”, Olukolade said.