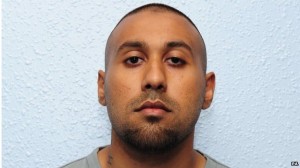 A British jihadist who fled to Syria and then joined a militant group with links to so-called Islamic State (ISIS) has been given a 12-year custodial sentence. BBC reports:

Imran Khawaja, from west London, spent six months in Syria, during which he was pictured posing with severed heads. Khawaja, 27, was arrested in Dover last June after faking his death and trying to return to the UK undetected. He admitted preparing for acts of terrorism, attending a camp, receiving training and possessing firearms.

Delivering his decision, judge Mr Justice Baker said Khawaja posed “a significant risk of serious harm” to the public. He will serve a minimum of eight years and also serve five years on licence. At Woolwich Crown Court, Khawaja’s counsel Henry Blaxland QC told the court his client had a very low IQ and had been “indoctrinated” in the months before he fled for Syria, in January 2014.

But Mr Justice Baker described Khawaja, who joined the Rayat al-Tawheed (RAT) insurgent group, as a “willing and enthusiastic” participant in recruitment films. And he dismissed Khawaja’s claim that he came home to see his family and regretted his actions.