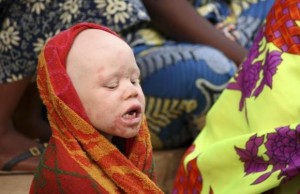 A Tanzanian court has charged four people over the murder of an albino woman over six years ago as pressure mounts for authorities in the east African country to do more in order to stop the killing of albinos whose body parts are prized in black magic. Reuters have more:

Ezron Mwasimba, public prosecutor in the high court in northern Mwanza city, said the four were accused of killing 22-year-old Zawadi Magindu at Nyamalulu village in Geita in November 2008 and cutting off her legs and one arm.

They pleaded not guilty on Thursday with the hearing to continue next week.

The trial is the first of its kind to be held in the Geita region where six albinos were killed and three wounded between 2007 and 2012, according to police data. It is expected to be closely followed by local residents and campaigners.

“We have gathered compelling evidence against the accused persons including from members of the bereaved family who had identified them,” Mwasimba told the Thomson Reuters Foundation.

The charges come as members of Tanzania’s albino society prepare to hold nationwide protests next week to call on the government to take more action to stop attacks.