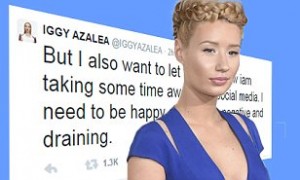 The pressure of being a celebrity is one mighty cross to carry, sometimes it forces people to even contemplate suicide.

Talented white white female rapper, Iggy Azalea is pissed after fans criticized her of having cellulite in some bikini photos from her recent vacation in Hawaii with her boo, Nick Young.

Iggy has made up her mind to quit social media on February 19, she wrote on Twitter, “Just got back from a great vacation, came online and saw apparently it’s shocking and unheard of to be a woman and have cellulite. Lol,” apparently referring to Radar Online‘s article about paparazzi pictures from her recent vacation in Hawaii with Nick Young.

“I just want to have peace and relaxation time without a perve with long distance lense hiding out taking pictures, everyone deserves peace,” the “Work” hitmaker continued, “I feel the hatred and pettiness i see online at all times is at making me become an angry person and I cannot be that. To become nasty because of the way I feel iam treated would be a disservice to my fans and I promise i will try to keep smiling.”

She then announced her social media break. “But I also want to let my fans know I am taking some time away from social media. I need to be happy and it is too negative and draining,” she tweeted, “My management will tweet/run my accounts from today onwards with updates etc unless any message is signed -IA. Love you all. Peace out!”

The “Black Widow” rapper then explained her reason to quit social media, “It’s really more about the fact every time I come online for the last 4-5 months I see only negative awful things. and thus I can no longer ignore the Internet is bad for happiness, unless youre sadistic.”