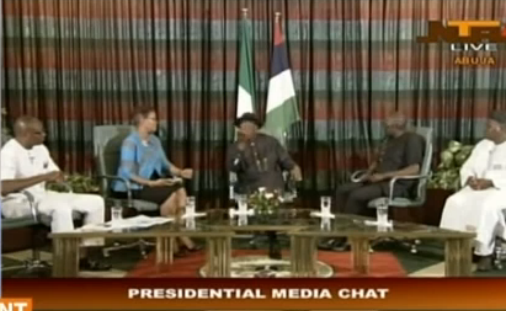 President Goodluck Jonathan, yesterday clarified what he meant by stealing is not corruption, saying he was quoted out of context.

Responding to questions during a presidential media chat on Wednesday, the President explained that the remark flowed from a discussion he had with a former chief justice of the federation, who told him of how he had to distinguish straight acts of stealing from other forms of corruption he acted upon.

“I made that statement because I quoted the former Chief Justice of Nigeria, Mustapha, (when) I called a meeting then, with the anti-crime organisations and the judiciary.

“The CJN, Mustapha decided to take a look at the files that dealt with corruption and more than 80 per cent of them were just cases of stealing. But people use corruption to cover all. What I am saying is that let us go to the South-West and go to a typical community and they look at you and say this man is corrupt, people will be looking at you. But call that same man “ole”, that is thief, and see what will happen to him. Our people hate thieves more than corrupt people, yet most times, we use corruption to cover the lapses.

“A thief should be called a thief and treated as such. In my village, when an adult steals, they strip him naked, humiliate him and his family, but if you say this man is corrupt, they won’t know what you are talking about. We are using corruption to cover it all up.

“So, let us communicate properly. It was not me that said it, I quoted Mustapha. He examined the corruption cases and he saw that they were just cases of stealing.

“We are identifying thieves; we can talk about what the agencies are doing. We have made more convictions in this period than before. But I always say that the answer is not convicting more people. We must make sure that they don’t steal. Do not put the money where they can steal it. That is what we are doing.”