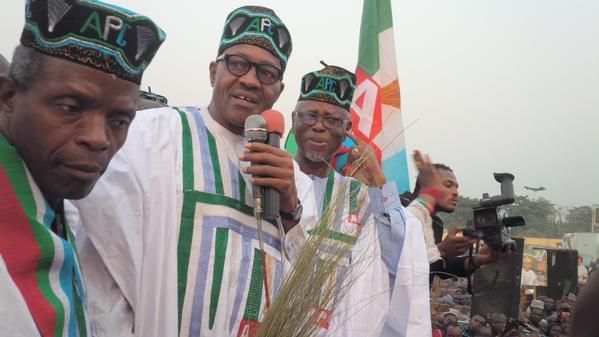 The All Progressives Congress Presidential Campaign Organisation (APCPCO) has reminded Nigerians that President Goodluck Jonathan made a number of promises to them while soliciting for their votes in 2011, which he is yet to fulfil.

In a statement issued on Thursday, the APCPCO noted that President Jonathan’s yet unfulfilled promises include the rehabilitation of all existing power generation; distribution and transmission assets to give a minimum of 6,000mw of electricity; the harnessing of alternative sources of energy such as coal, wind and solar to generate an initial 13,000mw, and the unbundling of PHCN into 18 successor companies.

According to the campaign’s Director for Media and Publicity, Malam Garba Shehu, “Four years after he made those promises, President Jonathan is still making more promises to Nigerians, when he clearly has no intention of fulfilling them the same way he has not fulfilled those regarding power.”

The statement pointed out that, in the initial moves craftily aimed at convincing the nation that he was true to his word, the Peoples Democratic Party (PDP) candidate went on to create the Nigeria Bank Bulk Electricity Trading Plc. and undertook an MoU with General Electric mostly to add up to 15 percent in power projects to achieve 10,000mw addition by 2020.

“However, till date, unacceptable lapses are still seen in the power sector”, the statement said, adding “All over Nigeria, from Yola to Port Harcourt to Ibadan, Nigerians are complaining about the poor supply of electricity to their offices and homes”.

The APCPCO noted that Nigeria’s current capacity is still under 4,400 megawatts, despite the PDP government’s promise to complete all National Integrated Power Projects (NIPP) to deliver at least 4,000 megawatts by 2012.

“As of 2015, NIPP has not met 50 percent of what it said it would achieve by 2012”, the statement said.  “NIPP’s involvement in the power sector requires more transparency and disclosure”.

The statement further noted that considering the current economic climate, the US Exim Bank provided up to $1.5bn for investors in the power sector and the status of the credit line by US Exim Bank remains shrouded in mystery.

“No one can show exactly where all that money has gone”, the APCPCO said.