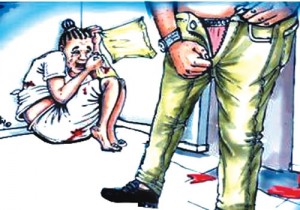 The Bauchi State Police Command said on Thursday that it had arrested a 45-year-old man for allegedly raping his 11-year-old daughter. The PUNCH has more:

The Police Commissioner, Shehu Lawal, while parading the suspect along with others before newsmen at the police headquarters in Bauchi, expressed worry over the increased rates of rape cases in the state, vowing that all suspected rapists would be charged to court and prosecuted.

Shehu Lawal said, “Since January, we have arrested over 10 suspected rapists. Only this week, we recorded over five cases.

“It is very worrisome that among the suspects arrested includes a 45-year-old man, who raped his 11-year-old daughter and two aged men, who are between 45 and 54 years, who raped teenage girls of between two and four years.

“Any suspect arrested in connection with any rape case, will be charged to court and be prosecuted because rape suspects will not be bailable.

“Even when the courts are on strike, the suspects will remain in detention till they resume and will be charged to court.”

Speaking to newsmen, the suspect, Abubakar Magaji, who resides in Liman Katagum in Bauchi Local Government Area of the state, said he engaged in the ugly act because his wife left him.