Those who pushed for the postponement of the election, despite the opposition from the All Progressives Congress and many Nigerians, include the Presidency; the Peoples Democratic Party Jonathan’s loyalists; the National Security Adviser, Colonel Sambo Dasuki; the Chiefs of Defence, Army, Naval and Air Staff, among others. 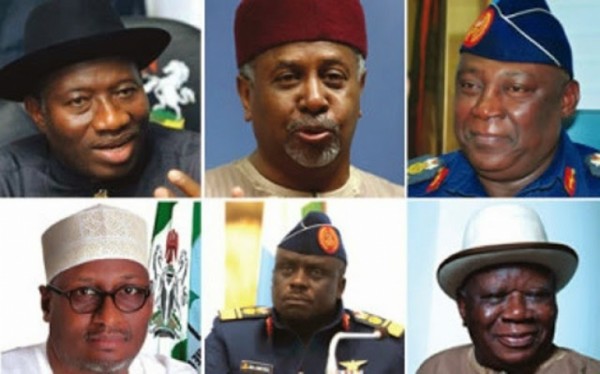 The polls were billed for February 14 (presidential and National Assembly) and February 28 (governorship and House of Assembly).

Jonathan, candidate of the Peoples Democratic Party, is contesting against retired Gen. Muhammadu Buhari of the All Progressive Congress and 12 other candidates at the presidential poll.

Two weeks ago, Dasuki, while speaking at a forum at the Chatham House in London, asked INEC to postpone the elections, saying the shift would allow for proper preparations and distribution of PVCs by the electoral body.

In an apparent reaction to Dasuki’s call, the United States had on January 25, 2015, advised Nigeria against postponing the elections.

The US Secretary of State, Mr. John Kerry, gave the advice after he met with Jonathan and Buhari.

Kerry urged the Federal Government not to postpone the elections as canvassed by Dasuki.

However, the military chiefs wrote to Jega, informing him of the security implication of holding the elections in February as earlier scheduled. This, it was learnt, what part of what influenced shifting of the polls.

Before the INEC chairman announced the new dates for the elections, the commission had insisted that the presidential and National Assembly elections be held on February 14, while the governorship and states House of Assembly election be held two weeks later.

Jega, however, changed the dates of the elections at a press conference he addressed at the commission’s headquarters in Abuja on Saturday. He repeatedly held the NSA and security chiefs responsible for the shift.

The press conference came up after he met with representatives of all registered political parties.

Jega was said to have on Saturday told the leaders of the parties, his officers and the civil society groups that the commission was ready for the election as planned, but that he was worried because of the claim by the security agencies that they would not be able to protect members of the staff of the commission and the electorates.

Sixteen political parties led by the ruling Peoples Democratic Party were said to have favoured the shifting of the elections, while nine others led by the opposition All Progressives Congress were against the move.

Jega also had a marathon meeting with the Resident Electoral Commissioners of all the 36 states and the Federal Capital Territory, Abuja.

At the meetings, Jega was said to have told the attendees that he had received a letter from service chiefs advising that he should postpone the general elections on the grounds that the security agencies were engaged in a renewed battle against insurgency in the North-East.

This, they claimed, would require their full concentration.

In the letter, it was gathered that the security agencies were demanding a rescheduling of elections by, at least, six weeks.

He also told the leaders of the political parties and the Resident Electoral Commissioners that he received a letter on Wednesday from the NSA, informing him that it would be difficult for the security agencies to protect the electorates during the election.

The Council of State had on Thursday rose from a seven-hour meeting, advising the INEC to conduct the elections.

Same Thursday, Jonathan’s supporters under the aegis of the Southern Nigeria Peoples Assembly led by Ijaw leader and ex-Minister of Information, Chief Edwin Clark, called for the postponement of the polls.

The group, at a press conference, pressed further by asking for the sacking Chairman, INEC, Prof. Attahiru Jega, and his arrest for allegedly conniving with some northerners to manipulate the presidential election against Jonathan.

Okurounmu, who read a prepared speech jointly signed by him, Clark and Ekwueme on behalf of the group, said the alleged connivance with the Northern Elders Forum was responsible for the near 100 per cent collection of Permanent Voter Cards in the North.

The PDP has also repeatedly called for a shift of the polls in the past two weeks.

An INEC National Commissioner, who spoke under anonymity after the Saturday meetings, said it was better for the commission to shift the elections in order to protect the integrity of their outcome and those that would take part in the conduct of the elections.

He said, “You needed to be at the meeting and see the mood of Jega. He was not happy because his integrity was at stake and because these same service chiefs had earlier given their words that they were ready.

“Now, if he didn’t listen to their advice, these same security agencies could create scenes (problems) for the elections. They could sabotage the distribution of sensitive materials.

“Apart from that, they could also refuse to provide security for those involved in the elections and could also sabotage the movement of sensitive materials.”

The source said almost everyone in the country was aware that the PDP-led Federal Government was not ready for the elections.

“If the Federal Government that is funding the security agencies and appointed their heads is not ready for elections, how do you compel their heads who are all appointees of the same government to say they are ready,” another INEC National Commissioner asked.