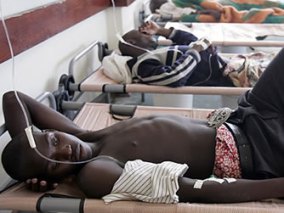 A pediatrician at the University of Port Harcourt Teaching Hospital, Prof. Alice Nte, made the disclosure on Saturday in Port Harcourt in a telephone interview with the News Agency of Nigeria.

She called on the government and relevant organisations to provide potable water and good public toilets to alleviate the plight of residents in the area.

“Our challenge in this locality is the absence of potable water and proper sewage system.

“Cholera may spread faster in this terrain because of our traditional occupation, feeding habit, and defecation.

“In the riverside area, we defecate in the river, fish in the same river, eat of the various sea foods from the same water body”, she said.

Nte explained that contaminated faeces eaten by sea foods and consumed by humans would further hasten the spread of cholera in the area.

She said potable water had been provided to some communities in Andoni Local Government Area following the first outbreak of the disease that claimed 20 lives early this year.

Nte urged the government to speedily replicate such project in Ikuru town and other riverside communities to contain further spread and possible deaths from the disease.

She advised residents of the area to boil their water before drinking.

She urged the people to wash their hands regularly with soap and water and maintain high sanitary habit to contain the spread of the disease. (NAN)