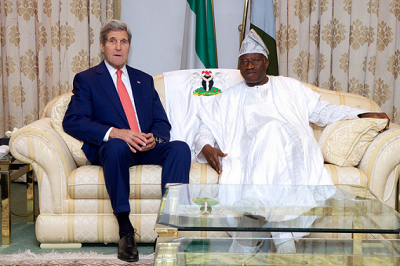 The United States government has expressed ‘deep’ disappointment by the decision to postpone Nigeria’s presidential election, which had earlier been scheduled for February 14.

A statement by U.S. Secretary of State, John Kerry, shortly after the announcement of the postponement of the elections by the Chairman of the Independent National Electoral Commission, Prof. Attahiru Jega, on Saturday, said political interference with INEC is unacceptable.

The INEC chairman, while announcing the shift, said the commission’s decision was based on a letter from security agencies informing the commission that security cannot be guaranteed if the elections go ahead as scheduled.

Jega said the military claimed it is currently engaged in operations against Boko Haram insurgents in the north-eastern part of the country and cannot be distracted by the elections.

“Last Wednesday…the office of the National Security Adviser (NSA) wrote a letter to the Commission, drawing attention to recent developments in four Northeast states of Borno, Yobe, Adamawa and Gombe currently experiencing the challenge of insurgency.

“The letter stated that security could not be guaranteed during the proposed period in February for the general elections”, Mr. Jega said.

INEC announced new dates of March 28 and April 11 for national and state elections.

But the U.S. government in its reaction said “it is critical that the government not use security concerns as a pretext for impeding the democratic process”.

The US said the international community would maintain a keen interest as the Nigerian government prepares for elections on the newly scheduled dates.

“The United States underscores the importance of ensuring that there are no further delays.

“As I reaffirmed when I visited Lagos last month, we support a free, transparent, and credible electoral process in Nigeria and renew our calls on all candidates, their supporters, and Nigerian citizens to maintain calm and reject election-related violence”, Mr. Kerry said.