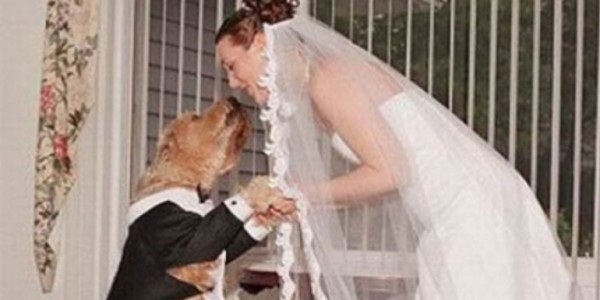 In a rather strange turn of events, a woman has vowed against men and married her pet dog. 47 year old Amanda Rodgers from Brixton in south London was married to a man 20 years ago, but the relationship unfortunately lasted no more than a few short months, so dismayed she decided to swear against men and turn to dogs.

Amanda states that the reason she decided to wed her pet dog was because she had all the qualities that she was looking for in a life partner: “Sheba had been in my life for years, making me laugh and comforting me when I was feeling low.”

Proceedings started out in a traditional way, when Amanda got down on one knee and proposed to her pet dog, Sheba. Though the dog could not respond, Rodgers says that she “could tell by her tail wagging that she said yes.”

More than 200 people attended the wedding which took place in Split, Croatia. Rodgers embraced the day fully making sure that everything was to her liking, adding that: “I’d dreamed of a perfect wedding dress since I was small, I made it myself for the ceremony. The day was wonderful, more fun than the marriage. I gave her a kiss to seal the deal and then everyone threw confetti. It was a wonderful moment.”

Despite it being a rather strange situation, Amanda doesn’t care what other people might think: “I know the wedding to Sheba wasn’t real in the legal sense. But was a nice way to mark what Sheba means to me. Sheba’s never unkind to me and she’s always happy.”