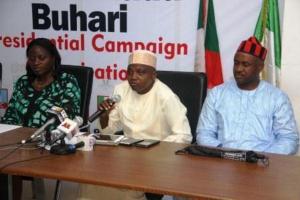 The All Progressives Congress Presidential Campaign Organisation, APCPCO, has denied a claim by the People’s Democratic Party that the APC presidential candidate and former Head of State, Gen. Muhammadu Buhari (retd.) is an Islamic fundamentalist prone to terrorist leanings.

It said that a PDP advertisement, which was promoted by an opinion article in Washington Times by a one-time US ambassadorial aide turned media manager, Richard Grenell, was the handiwork of “a failed President and his ruinous party, the PDP” to tarnish the hard won credibility and integrity of Buhari.

Reacting to the article, the APC Campaign’s Director of Media and Publicity, Mallam Garba Shehu, in a statement issued in Abuja on Sunday, said the ruling party was only clutching to irrelevant and irreverent decoys after abandoning serious issues of lack of power, insecurity, disunity, unemployment, infrastructural decay, comatose economy, and dysfunctional educational and health sectors, among others that affect the lives of the citizens and are concrete and poignant to the polls.

He said, “The PDP is a troubled-cannon; firing salvos in all directions, accidentally and incidentally, without caution, care or conscience. With the stark reality of defeat staring them in the face on March 28 and April 11 general elections, a reward for their maladministration, incumbent President Jonathan and his co-travellers have intensified their global campaign of calumny and outright fallacy – their well-known stock in trade.

“Nigerians are yet to forget the phoney phone call to the King of Morocco that never was or the futile effort to stop Buhari from speaking to the world at UK think tank at Chatham House, where their rented crowd confessed to being paid for a hatchet job”.

Shehu said Grenell is not a US ex-envoy but a former spokesperson for four past US Ambassadors to the United Nations.

Shehu added that the latest lie by the government and the PDP underscores “the new low to which Nigeria’s foreign policy drift has sunk under the Jonathan government, which hires all manners of local and global quacks, to manage their tattered image marked by cluelessness, incompetence, squander-mania, meteoric corruption and dearth of developmental ideas”.