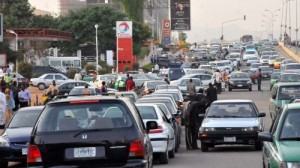 The Department of Petroleum Resources (DPR), Tuesday, threatened to shut down indefinitely, any petrol filling station engaged in hoarding.

Speaking to the News Agency of Nigeria (NAN), Mrs Chioma Njoku, Operations’ Controller for Lagos Zone of the agency said that DPR’s surveillance teams would clamp down on filling stations hoarding petrol or selling above the approved rate of N87 per liter.

According to her, the department has been inundated with complaints from the public on the arbitrarily fixing of petrol prices above the government approved rate. She said the agency will therefore sanction any filling station indulged in the illegal act.

“We have embarked on a monitoring exercise across Lagos since Monday in view of the current scarcity and discovered that some marketers were capitalising on the situation to make huge illegal profits.

“While some filling stations were under-dispensing, others were found hoarding products.

“We have compelled some of the marketers to begin selling of products immediately and sealed those that failed to comply,” she said.

Nkoju said the DPR would have sanctioned many more stations that were caught with sharp practices but decided to warn them due to the situation at hand.

She described the current scarcity as artificial, saying that the DPR would continue to ensure compliance at the filling stations and depots across the country until “normalcy returns to the system and the DPR is ready to sanction more marketers and seal more depots that are found wanting.”