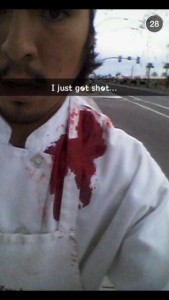 20 year-old Isaac Martinez was shot in the chest by a shooter in Arizona after he refused to give up the keys to his car. Instead of him to immediately call for help, Martinez decided to first take a selfie of his bullet wound and posted it to social sharing site Snapchat. See more from Scoop:

When the suspected shooter, Ryan Giroux, approached Martinez demanding the keys to his car, he refused and Giroux fired at him. For anyone who didn’t get enough detail from the photos, Martinez gave his 1,200 Facebook friends a point-by-point account of how the shooting went down. “He (the suspect) came in and demanded my keys for a getaway car. Of course i said no, and next was him pulling out a gun and cocking it. Soon as i saw it i started stepping back. And yelled for everyone to step back and get down.

Next thing i knew i was hitting the ground, got up as fast as i fell, and ran out the back exit. At the same time the assailant had started taking off in my chef instructors [sic] car. When i saw he had gone. I noticed the cops and fire trucks down the street and went there.”He followed up the picture with an update of how he was doing.

“So im home and well! I have no complicated injuries and should heal fine,” Martinez’s Facebook posts says. “I had a bullet hit me from behind and go through my shoulder and out my coller area. Any higher or lower it coulda hit a artery, or shatter my shoulder blade. It was a miracle hit.”

Martinez continued to update his social media followers throughout his recovery, posting a picture of himself in a hospital bed, with the gunshot wound visibly showing. Martinez is living proof that if getting shot doesn’t pull someone away from his phone, nothing will.