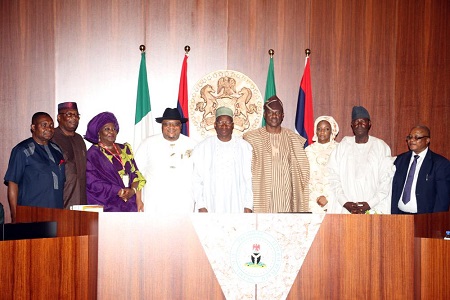 President Goodluck Jonathan on Wednesday swore-in eight new ministers recently confirmed by the Senate, with a stern warning to them to prove their mettle since they came into the cabinet at “injury time”.

He also assigned portfolios to the new ministers before the commencement of the weekly Federal Executive Council (FEC) meeting.

The president also made a former Minister of State for Health, Dr Khaliru Hassan, substantive Minister of Health.

Asking the new ministers to justify their appointment, President Jonathan urged them to give their best in service to the nation.

He said, ‎“For the ministers this is an injury time, is like bringing a player when you have just five minutes to go in a football match. So everyone wants to know what that player will do, the magic the player will perform within that short period. The player himself will be struggling to at least kick the ball before the end of the game.

“So you are coming in at a quite challenging period and I believe that a number of people will not envy you because government is coming to a close. But sometimes it is even good to come at this time because you are now well exposed to Nigerians. Your dancing steps will be watched by everybody and ‎we believe you will dance well”.

For the members of the Federal Civil Service Commission, the president charged them to bring their experience to bear in modernizing the civil service, which he described as ‘engine room of government’.

“Civil service is key. It is the engine room of government”, he said. “The greatest problem that people complain about is the issues of discipline in the service.‎ I believe that with you coming to join others you will continue to modernize the federal civil service”.