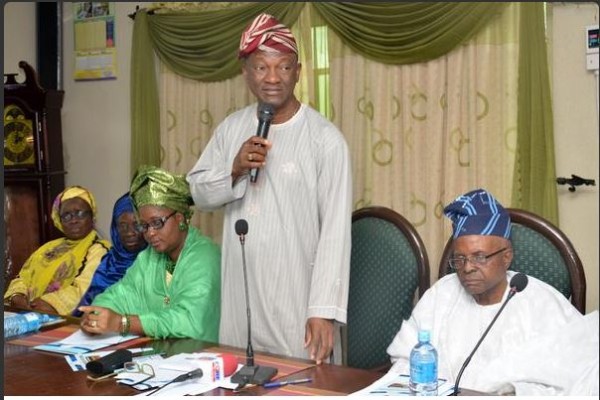 Governorship candidate of the Peoples’ Democratic Party in Lagos State, Mr. Jimi Agbaje, has insisted that he is not a stooge of anyone in the party.

Speaking on ‘Rubbin’ Minds’, a programme on Channels TV, Sunday, the Pharmacist turned politician cleared the air on the relationship between himself and Chief Bode George, the party leader in the state.

“Bode George is my party leader in Lagos, that’s a statement of fact. I’m not his stooge, if that’s what you want to hear”, Mr. Agbaje said.

“And those who know me know that I’m nobody’s stooge. There’s nothing like that. He’s a party leader.

“Now if a man is charged to court and sentenced for a crime and a superior court reverses that sentence, then he’s not guilty. So it’s either you accept it, it’s not fair when you take something when you think it favours you, and that’s important”.

Sunday’s edition of the programme had been billed to feature both Mr. Agbaje and Akinwunmi Ambode, the All Progressives Congress, APC, governorship candidate.

But Mr. Ambode turned down the invitation to participate in the programme.

Mr. Agbaje said that although the idea of the Bus Rapid Transit, BRT, was a good one, its implementation had not been the best.

He also said that he would improve water transportation in the state to ease the pressure on the roads.

“What we’ve had on the waterways are very small boats, there are so many people who are actually very scared of these small boats. So we are going to get bigger boats, ferries more or less, so people feel safer. It’s only the strong that takes those small boats. So you got to do more”.

The PDP flag bearer also said that he would not ban Danfo buses in Lagos, but would discourage the springing up of illegal bus stops in the metropolis.

On the issue of state police, Mr. Agbaje supported the call, said that it would enable communities to be better policed.

“I’m not sure it’s an APC thing. I’m an advocate of state policing and I’m not APC. I believe we need to have state police because as a state government you’ve got priorities. The police is federal, it’s stretched.

Mr. Agbaje, whose campaign is based on welfare and improved standard of living for people of Lagos State, stressed that he would focus on “fair” taxes, adding that government should not be over-burdening citizens captured in tax nets.

“What happens today is government in wanting to raise money takes advantage of the regulatory agencies to raise money in a wrong manner”, he posited.

“If you want to build a house for example, you want to apply for approval plans for construction permit, the whole essence of applying is to ensure that what you want build is not going collapse on anybody’s head and to make sure that its right.

“Again, it discourages people from investing in housing because of these kinds of restrictions”.

Mr. Agbaje further said that he does not participate in “negative campaigns”.

“Why I said ‘I’m not one of them’, the message is that I’m not a typical politician. So it has nothing to do with party, it’s got to do with politics in general.

“You tend to look at politicians, they tell lies. I’m not your typical politician. I want you to take me for what I am. If I tell you something I want you to believe what I’m saying. I’m not saying it just for saying sake. And that’s what’s working for me”.