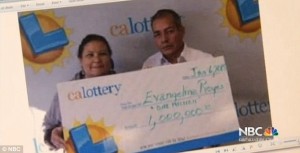 A lawsuit filed against a $1 million lottery winner in California alleges that the lotery winner promised half of the jackpot to the liquor store owner who sold her the ticket. UPI has more:

Laxmi Bhardwaj, owner of USA Liquors in Milpitas, filed a lawsuit alleging he loaned Eva Reyes, 53, of San Jose, money to purchase lottery tickets, and in exchange she offered to split any winnings evenly. Bhardwaj’s lawsuit alleges he is entitled to $350,000 after taxes and he has a signed note from Reyes agreeing to the deal.

However, Reyes said the deal was only for a fraction of the prize money, $50,000. Nelson McElmurry, Reyes’ attorney, said the $50,000 was specified in the handwritten note, but it appears to have since been altered. “It appears somebody may have tried to squeeze in ‘three hundred thousand’ in hindsight,” McElmurry told KNTV.

Reyes said she won $1,000 from a scratch-off ticket at the same store in December and she paid Bhardwaj $100 as part of a similar deal. Court documents allege she gave the store owner $500 of her December winnings. Reyes said she no longer plans to split any of the money with Bhardwaj. “Before I wanted to give the $50,000, but later I say forget it,” she said. “Why do I have to give it? I win the money.”