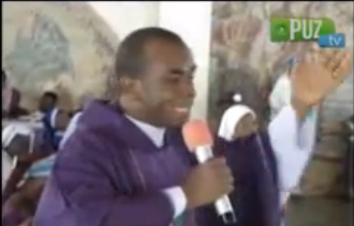 Coordinator of the Enugu-based Adoration Ministries, Rev. Fr. Ejike Mbaka, has raised an alarm over plans by President Goodluck Jonathan and his wife, Patience, to kill him over his criticism of the Federal Government and his opposition to the president’s re-election.

The Catholic priest in a new video currently trending on YouTube, made the allegation during a sermon he recently delivered in his church.

The congregation erupted in a howl when Mbaka said, “President Jonathan and his wife are planning to kill me”.

Mbaka, whose recent comments on the general elections ruffled a lot of feathers, said the plan to assassinate him was an indication that President Jonathan no longer had the fear of God in him.

He said, “Although I sent a letter about this somewhere but I want to say this to the atmosphere. Let me say to the whole world that President Jonathan and his wife, Patience, are planning to assassinate Father Mbaka. It is a known secret, so whoever they want to use, I don’t know. They may not come themselves. They may use these unemployed people. The same people I am speaking for. I don’t know why people no longer have the fear of God.

The Roman Catholic priest insisted that his criticism of the Jonathan administration was a divine mandate, while making allusion to the biblical story of when God sent Moses to tell Pharaoh to let the Israelites go.

He compared his New Year message against President Jonathan to Moses’ message to the Egyptian King, Pharaoh.

He said in the video, “I am just trying to tell any Pharaoh that is threatening to kill any Moses to remember what happened in Exodus chapter 12. After the Passover, the family of Pharaoh cried. They ended in the middle of the Red Sea”.

He said despite the threats, he would continue to discharge his duties without fear of anyone.

Fr. Mbaka also denied that Patience Jonathan gave him any money when she visited his church late last year where he prayed for her and predicted victory for the president.

He said although President Jonathan dropped money for him through Deputy Senate President Ike Ekweremadu, he left the money with Ekweremadu and his wife. He also said that the first lady’s offering to the church was equally rejected.