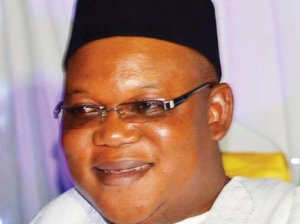 The Social Democratic Party (SDP) governorship candidate in Taraba, Chief David Kente, has denied the rumour making the rounds that he has stepped down from the race.

“I want to make it clear that I have not and will not step down for anybody”, Kente said on Friday in Jalingo at a press conference.

Represented by Mr David Adekoya, his Special Assistant (SA) on Media and Publicity, Kente described the rumour as “the handiwork of mischief makers”.

“I did not also return to the PDP as being speculated by some mischief makers who are obviously intimidated by my popularity among electorate”, he said.

He said the reported endorsement of a political party by the leaders of Christian Association of Nigeria (CAN), in Taraba, was an attempt to mislead the people from supporting him.

Kente urged his supporters to ignore the rumour and turnout en masse on April 11 to give him the mandate to make a difference in the governance of the state. (NAN)