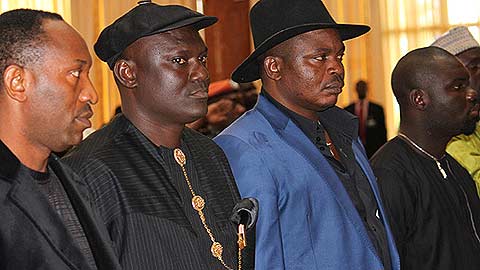 A former deputy commander of the Movement for the Emancipation of the Niger Delta (MEND), Ebikabowei Victor-Ben, popularly called Commander Boyloaf, has explained the reason for the shift in strategy by the ex-militant generals in the region over the call for President Goodluck Jonathan’s re-election in the March 28, 2015 presidential election.

He said though the decision to change strategy from the call for war to the diplomatic discussions to convince other ethnic Nationalities on the need to re-elect President Jonathan is not a show of weakness, the action by the ex-militant leaders was to ensure peace and more votes across the country for the president.

Victor-Ben, who made this known in Yenagoa, the Bayelsa State capital during a courtesy call on him by ex-militant leaders under the Presidential Amnesty Phase 2 led by General Aso Tambo, said the ex-militant leaders while arriving at their decision to adopt a more diplomatic approach towards Jonathan’s re-election, considered the fact that it is easy to destroy but a difficult task to build.

The former MEND commander said, “Our position was not a threat but rather an appeal to other regions of the country to see reasons why they should support the re-election of Jonathan, reiterating that anything other than that will be resisted. We call on the Niger-Deltan people to stand up against the impunity and oppression of the region by desperate political leaders in the Northern part of the country”.