Home Metro News Ambode Is My Choice, Vote Him If You Want Lagos To Be...
Facebook
Twitter
WhatsApp 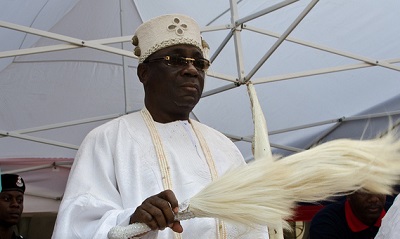 The Oba of Lagos, Oba Rilwan Akiolu, has caused a storm with his reported threat to Igbo residents to vote his anointed candidate, Mr. Akinwunmi Ambode of the All Progressives Congress (APC), as the next governor of the state.

The Oba, who reportedly made the threat on Sunday when he met with Igbo leaders in his palace, said failure on the part of Igbo citizens in the state to vote Ambode will translate to a non-prosperous stay for them in the nation’s commercial capital.

The paramount ruler urged them to swing their votes to the APC because he personally chose Ambode as the governorship candidate of the APC and based on tradition, whoever the king anoints as governor, must emerge victorious.

Oba Akiolu, who was said to be visibly angry during his address, added that he was not begging, but giving an instruction as to what he expected his Igbo subjects to do.

“I’m not ready to beg you. Nobody knew how I picked Ambode. Jimi (Agbaje) is my blood relation and I told him that he can never be governor in Lagos for now. The future belongs to God. I am not begging anybody, but what you people cannot do in Onitsha, Aba or anywhere, don’t do it here. If you do what I want, Lagos will continue to be prosperous for you”.

The monarch said anybody against Ambode does not wish the state well.

“‎I am for the progress, growth and development of Lagos. Ambode is highly cerebral, he’s a symbol and he is going to deliver the message which I, the Oba of Lagos, have said. And he will govern the state for another eight years. He is going on a mission and God will give him the wisdom and knowledge to fulfil that mission.

Akiolu used the occasion to restate what he has always said that Goodluck Jonathan administration did not cause the crisis in Nigeria, but that the crisis was caused by another person, who he refused to mention.

“If not for the appeal from Asiwaju (Bola Tinubu) and my highly respected maternal father, the Awujale of Ijebuland, all what is happening today is not the cause of the present government. The man who caused everything knows himself”.

In his response, the Eze-Ndigbo of Amuwo-Oriade, Dr. Gordian Dimojiaku, promised that Igbo in Lagos would support Ambode.

“But we have learnt our lesson. Saturday’s election is going to be a different thing and Ambode is going to win. Everybody knows that when you fail the first time, you cannot afford to fail again. We are going to tell our people that Ezes from the 20 Local Governments and 37 Local Council Development Areas are here and that we have sworn with the Oba that w‎e are going to make sure that Ambode wins next Saturday’s election‎”.