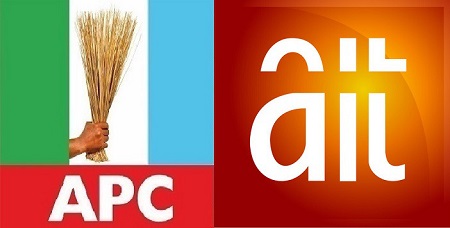 The All Progressives Congress (APC) has clarified that all accredited media organizations in the country, including the African Independent Television (AIT), which was highly critical of its candidate in the run-up to the presidential elections are free to cover the activities of the President-elect, Gen. Muhammadu Buhari (retd.).

The clarification came on the heels of reports that Mr. Buhari had barred the AIT, owned by PDP chieftain, Chief Raymond Dokpesi, from covering his activities pending when he resolves some issues relating to standard and ethics with the private TV station.

The APC Presidential Campaign spokesperson, Garba Shehu, had while confirming the development on Monday evening said: “AIT has been asked to stay aside based on security and family concerns. In addition, Buhari has decided that they will have to resolve some issues relating to issues of standard and ethics”.

However, in a statement issued in Abuja on Tuesday by its National Publicity Secretary, Alhaji Lai Mohammed, the APC said the incoming Buhari Administration will not discriminate against any media organization, irrespective of its role during the electioneering campaign leading up to the recent polls.

It, however, enjoined all media organizations to observe the highest level of professional standards in carrying out their duties.

“There is a Code of Ethics guiding the practice of journalism in Nigeria, and this demands every journalist to ensure a strict adherence to the highest levels of ethics and professionalism in carrying out their duties.

“There must be repercussions, within the realms of the law, for media organizations which have wantonly breached the Code of Ethics of the journalism profession and turned themselves to partisans instead of professionals. But such repercussions will not include barring any accredited media organization from covering the activities of the President-elect”, APC said.