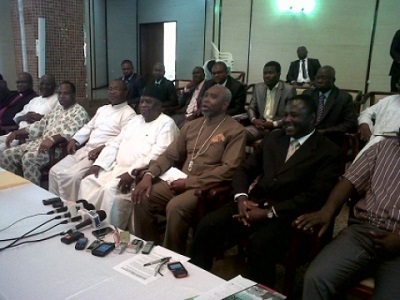 The National President, Christian Association of Nigeria (CAN), Pastor Ayo Oritsejafor, and Arch Bishop of Abuja, Cardinal John Onaiyekan, on Tuesday congratulated the president-elect, Muhammadu Buhari, on his election.

CAN president in a statement in Abuja stressed the need for harmony between Christians and Muslims in the quest for a prosperous Nigeria.

He also saluted Nigerians for a peaceful election and prayed for a prosperous future for the country.

Also, the Arch Bishop of Abuja, Cardinal John Onaiyekan, said losers should learn to accept defeat and the winners should not use this opportunity to oppress the losers.

Speaking in an interview with the News Agency of Nigeria (NAN) in Abuja, Onaiyekan also advised politicians to learn a lesson that a political content must have winners and losers.

The cleric added that winners should not use the opportunity to oppress the losers, adding that Nigeria would remain one, whether Nigerians liked it or not.

”Nigerians should take a queue and learn a lesson that a political contest must have winners and losers”, he said.

Onaiyekan, a member of the National Peace Committee, said the committee visited the State House to congratulate President Goodluck Jonathan for his “statesmanship” at the just-concluded election.

The committee also congratulated Jonathan for his good conduct and for conceding defeat.

”I am in the company of other members of the National Peace Committee; we went to greet and to thank Jonathan for conducting free, fair and acceptable elections. We also congratulated him for the conduct free, fair elections, the security and for conceding defeat”, Onaiyekan said.

The North East Zonal Chairman of the association, Rev. Shuaibu Byel, gave the commendation in an interview with the News Agency of Nigeria (NAN) in Bauchi.

“I was so elated when I learnt that President Jonathan accepted defeat and went on to congratulate General Buhari for winning the presidential election.

“This action demonstrates that Goodluck Jonathna is a true politician and a man of peace”, Byel said.

He urged all politicians who contested and lost in the election to emulate Jonathan’s spirit of sportsmanship.

The chairman congratulated Buhari for winning the election and urged him to carry everybody along irrespective of political, religious and ethnic differences.

He equally urged the new president to fulfill his campaign promises so as to meet the aspiration of the people. (NAN)