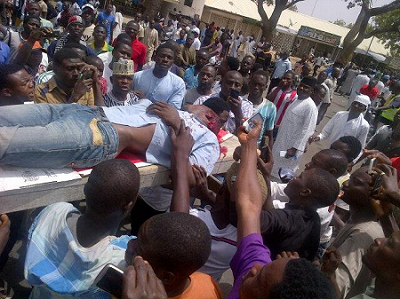 A septuagenarian, Alhaji Yahaya Wunti, on Thursday, decried the killing of his 28-year-old son, Mohammed Bello, by a trigger-happy soldier, who shot him on the head, last Sunday, in Bauchi, wondering what pushed the security operative to shoot the deceased in the head.

The late Bello, according to his 78-year-old father, was among hundreds of youths, who besieged the state headquarters of the Independent National Electoral Commission (INEC), on the Ahmadu Bello Way, in Bauchi, where the collation of last Saturday’s presidential election took place last Sunday, to “defend” their votes against suspected manipulation.

There were conflicting reports on how the late Bello was killed by the soldier.

While some said he hurled a stone at the soldiers deployed to the INEC headquarters, others said the deceased was in the crowd, without posing a threat when he was hit by the bullet shot to disperse the surging crowd.

Alhaji Wunti, a bicycle repairer, told journalists that his son left their house, at Wunti area of Bauchi metropolis, with his permission to go to the INEC office that day,.

“Mohammed always asked for my permission before leaving my house. He came to me at around 11 in the morning and informed me that he wanted to go to INEC and I asked him whether he was carrying anything that would incriminate him on him and he said no. Not up to 10 minutes later, they brought my son’s dead body, telling me that he was shot by a soldier”, the bereaved father said.

According to the bereaved septuagenarian, the late Bello, was single, a mason and was never a trouble maker; wondering why the soldier, who ought to have protected him and others, chose to waste the life of a promising young man.

“He was a good boy who did not like making trouble. He was a mason and he was hardworking but he was very passionate about Buhari. I know my son wouldn’t break the law because of his love for Buhari, so I wonder why the soldier chose to waste a promising person like Mohammed”, he lamented.

Meanwhile, the senator-elect for Bauchi South senatorial district, Mallam Ali Wakili, had paid a condolence visit to the father of the deceased, expressing his regrets over the unwarranted killing.

Wakili, who floored Governor Isa Yuguda in last Sartuday’s senatorial election in the state, informed that he had reported the shooting of the late Bello to the Army and the trigger-happy soldier had been arrested.

The All Progressives Congress (APC) senator-elect added that the army authorities had assured that the matter would not be swept under the carpet with a view to ensuring that the bereaved family gets justice.