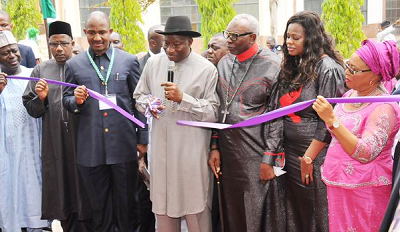 President Goodluck Jonathan on Saturday inaugurated the over N600 million Jubilee Resort and Leadership Centre constructed by the Christian Association of Nigerian (CAN) in Abuja.

The Centre, which is within the premises of the National Christian Centre, Abuja, provides rooms, accommodation and halls for conferences to the public at a fee.

Thanking God for giving him the privilege of flagging off the construction and eventual commissioning of the project, Jonathan said that with unity of purpose, the body of Christ can achieve greater things.

He said: “I urge Nigerians to imbibe the spirit of unity and with it nothing can stop us from reaching greater heights”.

He noted that one of the greatest assets from a family to the nation is good leadership.

“I believe this centre will be used to re-orientate and re-focus us”, he said.

The president, however, warned that it will not be worth the effort if the multi-million Naira edifice cannot generate income to at least cater for its maintenance.

Commending the prudence in the cost of the building, Mr. Jonathan added that building and its facilities would have cost three times the cost expended if it was executed by the government.

In his remarks earlier, CAN President, Pastor Ayo Oritsejafor, stated that the cost of the building came down because some engineers and other people rendered their services free of charge.

Stressing that there are many five-star and four-star hotels in Abuja, he said that none of them could boast of a serene and godly environment like the resort.

Also noting that the presence of God is worth more than any other thing, Oritsejafor said that the resort has become a revenue earner for the CAN already.