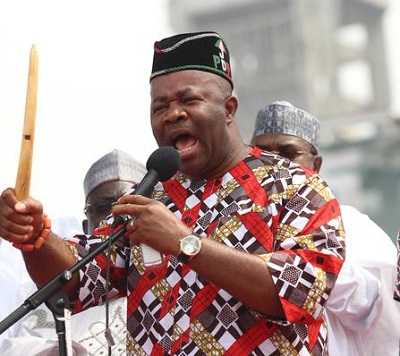 Governor Godswill Akpabio of Akwa Ibom, on Friday, urged Nigerians to emulate the statesmanlike nature of President Goodluck Jonathan for conceding defeat for peace to reign in Nigeria.

Mr. Akpabio said this in his state-wide broadcast to mark 2015 Easter celebration in Uyo.

He said the lesson of Easter was recently brought home to Nigerians by the statesmanlike action of the President.

According to him, the President’s decision to concede defeat even before the announcement of final result is in the best interest of Nigeria and Nigerians.

He added that, “by this act, Mr. President has resurrected morality, good conscience, patriotism and goodwill for our country”.

The governor said President Jonathan had kept his vow that his ambition was not worth anybody’s blood.

On the April 11 governorship election, Mr. Akpabio urged the electorate to demonstrate their commitment to unity for a greater Akwa Ibom State.

He said, “the true Akwa Ibom spirit of loyalty was tested in the presidential election and we acquitted ourselves creditably.

“We were with the President right down to the finishing line and proud that we turned in close to a million votes for the President.

“We are proud of the President’s performance and proud of our support for him.

“This nation now knows that we have no place in this blessed land of promise for the Judas Iscariots”.

He said those seeking to divide the state with politics needed to remember that Christ said it was through loving one another that one could prove himself a true disciple.

The governor urged Nigerians to adhere to the lessons of Easter, including self-sacrifices for the unity and progress of the state and Nigeria.

Mr. Akpabio also urged Nigerians, particularly Akwa Ibom people, to remain united in spite of the outcome of the past elections and to face the forthcoming elections with great hope.