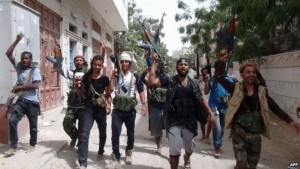 Fresh fighting has been reported in the southern Yemeni city of Aden between Houthi rebels and militiamen loyal to President Abdrabbuh Mansour Hadi. BBC reports:

Several houses in the central Crater district were set on fire after being hit by rockets as the rebels advanced, residents told the Reuters news agency. Warplanes of the Saudi-led coalition, which backs the government, meanwhile bombed rebel targets to the north.

Iran is also reported to have sent navy vessels to the Gulf of Aden. Navy commander Rear Adm Habibollah Sayyari was quoted as saying by state-run Press TV that a destroyer and another ship would be deployed off Yemen as part of an anti-piracy campaign “safeguarding naval routes for vessels in the region”.

Tehran has denied Saudi accusations that it is providing military and financial assistance to the Houthis, who adhere to a branch of Shia Islam known as Zaidism. The campaign by Sunni-ruled Saudi Arabia, which seeks to “defend the legitimate government” of Mr Hadi, has so far failed to stop the Houthis’ assault on Aden.