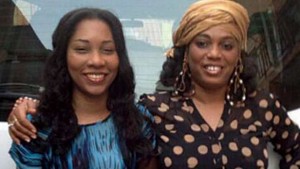 Rolari Segun, Yeni Kuti’s daughter and the first grandchild of Fela Anikulapo-Kuti is set to get married this June.

She will be marrying Benedict Jacka, an Australian author on June 27, 2015 and their union will take place at the New Afrikan Shrine at Agidingbi, in Ikeja.

Benedict Jacka, who graduated from Cambridge University has written the ‘The Alex Verus‘ series.

Before being an author he worked in London as a civil servant, bouncer and a teacher.

27 year old Rolari Segun graduated from the University of Leeds in 2010.

Benedict came to Lagos in December, 2014 to see Rolari’s families- the Kutis and the Seguns

In 2013, her mother claimed that Rolari is still a virgin during an interview on the TV station TVC.

The wedding ceremony at the shrine is strictly by invitation. Another ceremony will happen in August at the United Kingdom.