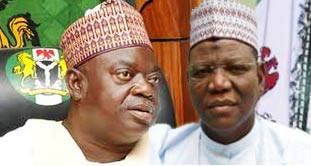 Governor of Niger State, Muazu Babangida Aliyu, on Thursday renewed his call for the resignation of the Adamu Mu’azu-led National Working Committee NWC of the Peoples Democratic Party, PDP.

The governor, who slammed the Mu’azu-led NWC for holding on to power despite leading the party to what he termed a “disastrous defeat” in the last general elections in the country, said that the best and most civilized thing was to throw in the towel.

He made this view known during the commissioning of the multi-billion Naira Shiroro Bridge linking Niger and Kaduna States.

According to Mr. Aliyu, although the PDP suffered defeat at the presidential level and in most states, which was followed by mass defection of some members of the party to the All Progressives Congress, APC, these were not enough reasons for him to dump the party.

Also, his Jigawa State counterpart, Alhaji Sule Lamido, who spoke on the occasion, said that he would not leave the PDP which he was a foundation member for tenants saying that defection was not be the answer to such defeat in a democracy.

However, Governor Aliyu said, “how could you lead a party to disastrous outing in an election and you are still in place, take the blame for the defeat by quitting and if the PDP still wants you they will beg you to stay?”

He warned that if Muazu and his team refused to throw in the towel now “the actual change will come in March 2016 when we will elect new leaders at the national convention of our party”.

On rumour making the rounds that him and his Jigawa counterpart were planning on dumping PDP or floating a new one in readiness for the 2019 general elections, Aliyu described the speculations as not only misleading and without any root, but mere fabrications of falsehood.