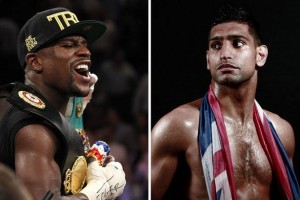 Floyd Mayweather is currently the hottest thing since slice bread. Just yesterday, an unknown Ghanaian boxer said he wants to challenge Mayweather, I overlooked that; this is more interesting though.

Due to his commitment to Ramadan, Khan has not fought at that time of year since his devastating defeat by Breidis Prescott in 2008.

However, the Muslim holiday ends in mid-July and Khan believes that would leave him enough time to train for what Mayweather insists will be his final fight.

Khan must first beat Chris Algieri in New York three weeks on Friday, but said: ‘I’m not ruling it out – it is possible I could fight in September.

‘Ramadan is a bit earlier this year so it can happen in September.’ Khan also claimed he was heartened by Mayweather’s display against Manny Pacquiao last weekend, despite his convincing win.

‘Mayweather looked great and did what he had to do to win the fight,’ he added. ‘He was catching Pacquiao with some good clean shots, his accuracy was great.

‘That is the way he fights, he is very skillful and patient. He wants the opponent to make mistakes. That is what I like about him.

Amir Khan his a British Boxer.