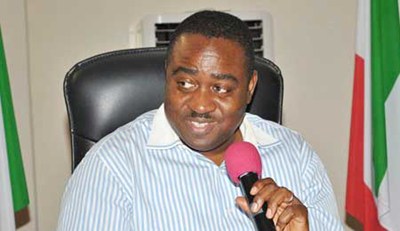 The Makurdi-based senior lawyer also urged the court to commit the Special Adviser to Governor on Local Government and Chieftaincy Affairs, Solomon Wombo, to prison for the same offence.

Mr. Ijohor made the submission Monday, while moving a motion filed by a member of the state House of Assembly, Benjamin Adanyi, against the state governor, Gabriel Suswam and eight others.

The lawmaker had challenged the passage of Benue State Council of Chiefs and Traditional Councils Bill on April 7.

The new law had among other things, approved the appointment of first class chiefs for the Tiv Area Traditional Council.

But Mr. Adanyi, on May 4, obtained an order from the court restraining Mr. Suswam and his agents from implementing the provisions of the new law.

Joined in the matter were Tor Tiv, the Och’Idoma, the Bureau of Local Government and Chieftaincy Affairs as well as the Benue State House of Assembly.

Counsel for the applicants, T D Pepe, had filed a motion for a stay of execution of the law, while also alerting the court that the respondents had put machinery in place for the implementation of the new law.

He then prayed the court to stop Mr. Suswam and his agents from appointing any person to the office of the 10 first class chiefs provided for in the new law pending the hearing and determination of the motion on notice.

The News Agency of Nigeria, NAN, reported that the court had granted the application and accordingly restrained the respondents or their agents from appointing or taking any step toward the appointment of persons as first class chiefs in the state.

In granting the application, Justice Hwande had directed that the implementation of the new law be stayed pending the hearing of the motion on May 11.
He also warned respondents that disobedience to the order of the court would amount to contempt.

But while addressing the court Monday, Mr. Ijohor said all the respondents in the case were dully served with the court order.

He, however, informed the court that in spite of the restraining order, the Benue State Government still went ahead to appoint six first class chiefs into the Tiv Area Traditional Council.

The Makrudi-based Senior Advocate of Nigeria, therefore, filed a contempt proceeding against the state’s attorney general and commissioner for justice as well as Mr. Suswam’s adviser on local government and chieftaincy affairs.

The chief judge adjourned the matter till May 15, for hearing on the motion.