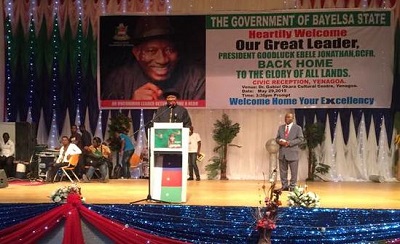 Former President Goodluck Jonathan Saturday appealed to the people of Bayelsa and Niger Delta in general to keep remembering him and his family in prayers.

This is just as he identified his former boss, Diepreye Alamieyeseigha, as the person that brought him to the political limelight.

Mr. Jonathan made this known at a Special Thanksgiving Service organised by the Bayelsa State Government at St. Peters Anglican Church, Yenagoa.

“Let me again thank all of you, and continue to request that your prayers should not stop now, even as we leave office”, said Mr. Jonathan. “I believe we still have a part to play in the development of our society, even as a former president”.

“With your prayers and your support, I’ll be strong enough to work with all of you in the development of our communities, local governments, and states and our nation”, he added.

The immediate past president also used the opportunity to thank members of his cabinet who attended the service; the Bayelsa State government; and President of the Christian Association of Nigeria, Ayo Oritsejafor.

He also thanked his former Minister of State, Education now Governor of Rivers, Nyesom Wike, who led a delegation of state officials and PDP members in Rivers State, ​to the service.

While expressing his sincere appreciation to former Governor DSP Alamieseigha, without whom, he said, he would not have become president, Jonathan said “At a time when I was not even thinking of being a commissioner in the state, he came to me and said I should run with him. That’s why I’m here today. Without him it won’t have been possible”.

Mr. Jonathan read the first lesson of the service, from the Gospel of Luke, and afterwards the officiating minister announced that the former president had requested for a special song for the service, Stand By Me.

“In the midst of faults and failure, stand by me; When I do the best I can, and my friends misunderstand, Thou knowest all about me, Stand by me”, the congregation sang.

After reading the B​ible chapter, she broke into a song, “What shall I say unto the Lord, all I have to say is thank You Lord”.

The congregation chorused after her.

In his welcome remarks, Governor Seriake Dickson of Bayelsa State said the thanksgiving service was to round off activities marking the “heroic homecoming of the hero of democracy”.​

“The significance of this thanksgiving service, we that are his children feel that all the activities we had put together will not be complete unless we come together to thank this awesome God” said Mr. Dickson.

The sermon, which was supposed to have been delivered by Bishop David Oyedepo of Living Faith Church Worldwide, but in his absence, was taken by Uma Ukpai of the Victory Cathedral Fellowship, Uyo, Akwa Ibom State.

The event was attended by wife of Bayelsa Governor, Rachel Dickosn, Wike, immediate past Secretary to the Government of the Federation, Senator Anyim Pius Ayim and Senator Emmanuel Paulker.