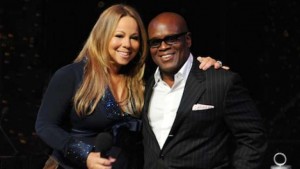 He said veteran singer, Mariah Carey won’t be topping the charts the way she did in her heyday despite trying to make a comeback with her latest Vegas residence.

”To even be on the radio at this point in her career is a huge accomplishment, because radio doesn’t cater to veteran artists or legends. Radio caters to in-the-moment stars,” Reid, who also happens to be her boss, explained during an interview with Billboard on May 17.

Reid also mentioned other veterans who are notably struggling to make a splash with their new work in this time.

“Nobody that put out records 25 years ago is going to have a No. 1. Not Paul [McCartney], Stevie [Wonder], Bruce[Springsteen], Mick [Jagger] or Keith [Richards]. Not Prince, not anyone,” he said.

Carey premiered her new single, ‘Infinity’ at the 2015 Billboard Music Awards in Vegas on May 17 and received quite an applause from a young crowd.