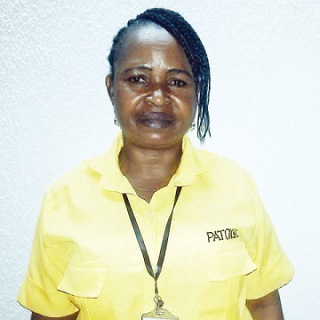 The Lagos State House of Assembly, on Monday held a special session to honour Josephine Ugwu, a cleaner at Murtala Mohammed International Airport, Ikeja, who returned N12 million she found at the airport toilet.

Ms. Ugwu made the huge find, and returned same, in January 2015.

She was invited to narrate her story to members of the Assembly.

Kolawole Taiwo, the Deputy Speaker, who presided, presented a letter of commendation and an undisclosed amount of money to Ugwu.

“For her honesty and patriotism for returning the N12 million on January 23, we find her worthy of honour.

“Her action was a great inspiration to many who believe in the future of Nigeria.

“Your conduct has positively affected the image of Nigeria internationally.

“It is an act worthy of emulation; this is why we decided to hold a special parliamentary session to celebrate your honesty, integrity, uprightness, sincerity, truthfulness and patriotism”, he said.

Contributing to the debate, Segun Olulade, (APC-Epe I) urged the legislature to give Ms. Ugwu an employment in the Assembly or recommend her to the governor for employment to encourage other Nigerian youths to emulate her.

In his contribution, Rotimi Olowo, (APC-Shomolu I) urged the state government to honour Ms. Ugwu by naming an institution or monument after her.

“This will drive home the need for honesty and integrity among the youths in the country”, he said.

The Deputy Chief Whip, Rotimi Abiru, expressed happiness that the motion he moved during plenary on March 2 urging the house to celebrate Ugwu had seen the light of the day.

He congratulated Ugwu for demonstrating to the world that there was hope for Nigeria, adding that she had written her name in gold.

He urged Nigerian youths to emulate her good character.

In her remark, Ugwu thanked the legislators for honouring her.

“I never expected that I will be honoured to stand before this Assembly not to talk of being recognised and honoured by this institution.

“I was just doing my duty and following the rules of the organisation I am working for and also living according to the training I received from my parents who brought me up”, she said.

Ms. Ugwu said her parents inculcated the virtue of honesty into her from her childhood.

“My family trained me not take anything that does not belong to me.

“I also want to prove to the world that Nigeria is a good country with people of integrity unlike the wrong impression given about the country”, she said.

She explained that it was the third time since December 2014 she was returning money left behind by passengers to airport security. (NAN)