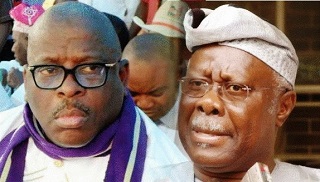 A former Deputy National Chairman of the Peoples Democratic Party, Chief Olabode George, has described as a ‘huge joke’ claims by Senator-elect Buruji Kashamu that he (George) was behind the siege laid on his Lagos residence by operatives of the National Drug Law Enforcement Agency.

Kashamu, who was involved in a stand-off with NDLEA operatives on Saturday morning for several hours, had accused George and his wife, Roli, who is the Director-General of the anti-narcotics agency, of being behind his ordeal “in a bid to score cheap political points”.

Speaking through his media aide, Austin Oniyokor, the senator-elect urged “well-meaning Nigerians to prevail on NDLEA, Chief George and his wife to toe the path of the rule of law and follow due process” on plans to arrest and extradite him to the U.S to answer drug-related charges.

Reacting to the allegation, George, who is presently in the United Kingdom, said he did not have the power to give his wife orders because she was not the chairman of the NDLEA and the agency adheres to due process.

The PDP chieftain said no right thinking Nigerian would believe that he was behind Kashamu’s ordeal because his name had never been mentioned before now.

He added that he had never been involved in Ogun State politics before and wondered how Kashamu’s detention could benefit him (George).

He said, “I don’t understand what this is all about. How does Kashamu’s arrest affect the price of milk? My wife is not the chairman of the NDLEA, so how can I give her orders when she has a boss? Also, that agency always follows due process.

“I am happy that the NDLEA has issued a statement to the effect that Kashamu’s arrest has nothing to do with me or politics. I do not dabble into Ogun State politics.

“Kashamu is like a younger brother to me and he is not known to speak in such a manner. I am sure it is his media adviser that concocted this falsehood”.