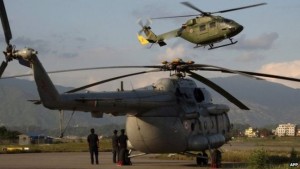 Nepal’s only international airport has banned larger aircraft carrying aid from landing because of concerns over its runway. Planes heavier than 196 tonnes had been allowed to land after last week’s earthquake but restrictions have been imposed because of potholes on the runway, officials say. BBC reports:

A government spokesman said the move would not affect aid efforts. More than 7,000 people died in the magnitude 7.8 earthquake. The chief of Nepal’s civil aviation authority, Mahendra Singh Rawal, told the BBC that there were no restrictions on medium-sized and smaller aircraft, and that the ban would be lifted after maintenance work to the runway.

Also on Sunday, the United Nations said that the problem of customs controls holding up aid deliveries from the airport was “diminishing”. “The government has taken note of some of the concerns that we’ve expressed to them and they’ve addressed those,” said Jamie McGoldrick, who is co-ordinating the UN relief effort in Kathmandu.

At least 7,040 people are now known to have been killed in the quake which struck near Kathmandu, Nepalese officials say. More than 14,021 people were injured. The death toll could go up, as search and rescue efforts continuing in several hill districts including Dhading, Rasuwa and Sindhupalchok, the government has said.