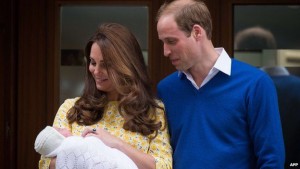 Family members have visited the Duke and Duchess of Cambridge’s new baby daughter at Kensington Palace. The Prince of Wales and Duchess of Cornwall spent more than an hour with their new granddaughter. BBC was there:

The Duchess of Cambridge’s parents, Michael and Carole Middleton, and her sister Pippa also met the princess. The BBC’s Peter Hunt says the name of the duke and duchess’s second child – sister to Prince George – will not be announced on Sunday. The princess, who is fourth in line to the throne, was delivered at 08:34 BST on Saturday at St Mary’s Hospital in London, and weighed 8lbs 3oz (3.7kg).

The Cambridges will spend the next few days at Kensington Palace; afterwards they are expected to travel to their country home Anmer Hall on the Queen’s Sandringham estate in Norfolk. A Kensington Palace spokesman said: “The duke and duchess are hugely grateful for the messages of congratulations they have received from people all over the world. It means a great deal to them that so many people have celebrated the arrival of their new daughter.

“Their Royal Highnesses were visited by the Prince of Wales, the Duchess of Cornwall, Mr and Mrs Middleton, and Pippa Middleton.” Prince Harry, who narrowly missed the princess’s birth after returning to Australia to finish his secondment to the country’s military, said she was “absolutely beautiful” and he could not wait to meet her.

Bookmakers say Charlotte and Alice have emerged as the favourite names for the princess, followed by Olivia, Victoria and Elizabeth.