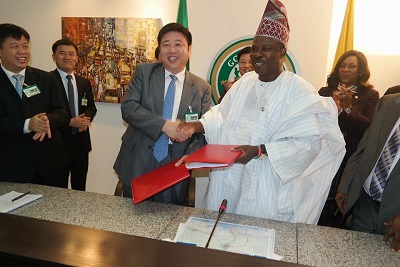 The Ogun State  Government has described the world view of the governorship candidate of the Peoples Democratic Party in the state, Gboyega Isiaka, as “too narrow”, following the latter’s thumbs down of the light rail project the state recently signed with the Chinese Civil Engineering Construction Company.

The Commissioner for Information and Strategy, Yusuph Olaniyonu, said this in a statement on Sunday in Abeokuta.

Isiaka had last Thursday, condemned the rail project, describing it as a “misplaced priority”.

The PDP flag bearer had argued that the project should not be the priority of the state for now as there were schools and health facilities that had decayed and in need of urgent government intervention.

He noted that there were many things Governor Ibikunle Amsoun did not tell the people of the state about the project.

He said, “One wonders where and when did the government conceptualise the project? Was it debated at any state executive council meeting or budget retreat? Was it advertised or bidded for? What is going to be the economic and environmental impact upon the economy and the geography of the state respectively?

“How would such humongous project be funded and under what repayment terms?”

In response to some of the questions posed, the commissioner said the project was a contractor-financed arrangement and it would open the state economy to massive investment and create employment opportunities for the youth.

He described the views expressed by Isiaka “as a reflection of his ignorance and narrow world view about developments, even within the country”.

Olaniyonu explained that any economy, where goods and services could not be easily moved from one point to another, was doomed, adding that the rail system had proved to be the best means of mass movement.

Apart from complementing the network of roads being constructed in the state, the commissioner pointed out that the project would allow the state to key into the light rail project of its neighbor – Lagos State and that of the Federal Government.

He said, “With the federal and neighbouring Lagos State governments commencing the construction of a light rail network, Ogun State needs to quickly key into it so as not to be deprived of the resultant benefits.

“Ogun State, by signing the contract with CCECC is only joining a network that both the federal and Lagos governments are about to create. That is why we are using the same contractor as them. This will save money, time and ensure compatibility.

“We are surprised that Mr. Isiaka did not know about the proposed light rail until last week. We publicly signed the Memorandum of Understanding in 2013 so that the contractor could prepare the design for us. The design was in fact featured prominently in the 2014 state calendar and other publications of the state government”.

“We are a forward-looking, progressive administration. Our plan is to create a modern, agro-based, industrialised and developed state. The light rail project is central to achieving this”, Olaniyonu added.