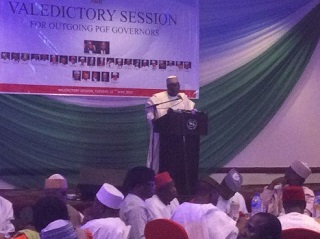 Governor Rochas Okorocha of Imo State, Tuesday night pointed out that the defection of five Peoples Democratic Party governors in 2013 to the All Progressives Congress was a deciding factor in APC’s victory in the last general elections.

Governors Rabiu Kwankwaso of Kano, Aliyu Wamakko of Sokoto, Abdulfatah Ahmed of Kwara, Murtala Nyako of Adamawa and Rotimi Amaechi of Rivers States joined the APC after staging a walk out on the PDP mini-national convention in Abuja.

Speaking at a valedictory dinner organised by the Progressive Governors Forum in honour of the outgoing governors, Babatunde Fashola of Lagos State, Messrs Kwankwaso, Amaechi and Wamakko, Mr. Okorocha, chairman of the forum, said “make no mistake about it, without the five Governors that joined the APC in 2013, we would not be here today”.

The Imo Governor added that the five governors took an enormous risk given what he described as a “vindictive” Federal Government.

Okorocha made specific reference to Mr. Nyako, who was impeached by members of the Adamawa House of Assembly over allegations of gross financial misconduct last June.

However, it was believed Mr. Nyako was sacked from office on the orders of the Presidency following a letter he wrote to President Goodluck Jonathan, accusing him of perpetrating genocide against people of the North-East.

Mr. Okorocha said by defecting to the APC, the governors transformed “a fledgling opposition into a national political movement”.

“…The moment the PDP lost five Governors was the moment it lost the presidency and its planned 60 years in power”, he emphasized.

Also speaking at the occasion, the National Chairman of APC, Chief John Odigie-Oyegun, said the outgoing governors raised the bar for their newly elected colleagues by their performance in office.

He, therefore, urged their successors to match and even exceed the standard they have set.

Mr. Oyegun said in less than two years of its formation, the APC had succeeded in winning the presidency, more states and controlling the majority in the two chambers of the National Assembly.

“I cannot say how proud I am to lead a party that has made history”, Mr. Oyegun said.

The national chairman reminded all the elected officials in the gathering that Nigerians expect a lot from them and that the APC is taking over at a period of intense challenge. “This nation has been run aground”, he pointed out.

Speaking in the same vein, former Vice President Atiku Abubakar said the outgoing Governors by their performance have given the incoming administration an agenda to pursue.

He also paid tribute to the five Governors saying their movement to the APC greatly enhanced the fortune of the party and led to the defeat of the PDP.

“They chose the difficult path, rather than the easy way out”, Mr. Atiku affirmed.

He also advised the APC to learn from the mistakes made by the PDP, stressing that the party has no option than to perform.

“We must be open and transparent, not like the PDP, we must avoid winner takes all, greed, arrogance, impunity and corruption”, Mr. Atiku said.

A national leader of the APC, Dr. Ogbonnaya Onu, said although the challenges before the party are enormous, the calibre of the officials gives him the confidence that the party will not only meet, but exceed the expectations of Nigerians.

Mr. Onu said Nigerians have already began adjusting to the disciplined way of life that is about to come.