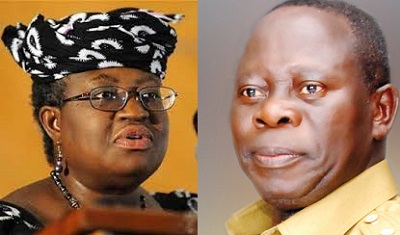 Governor Adams Oshiomhole of Edo State on Wednesday took the Finance Minister, Ngozi Okonjo-Iweala to the cleaners over her claims that states received N2.92 trillion excess crude money between 2011 and 2014 with little to show for it.

The governor slammed Mrs. Okonjo-Iweala for mismanaging the Nigerian economy, saying in the last four years, all she has been doing was merely feeding Nigerians with half-truths.

He said the minister has herself to blame as she ran the Excess Crude Account as a “one-man show”.

According to Mr. Oshiomhole, the recent grandstanding by the minister against oil marketers over fuel subsidy claims may not be unconnected with fear about the incoming President, Muhammadu Buhari.

“It is quite intriguing that with barely few days left in office, she has suddenly woken up from her slumber to realize that oil marketers have all along been falsifying subsidy claims and defrauding the nation of billions of naira and dollars”, the governor said.

He said the person best placed to explain the state of the country’s economy at the moment was Mrs. Okonjo-Iweala, stressing that as a member of the National Economic Council, he has had cause to speak out publicly at different times about the way the economy was managed by the minister.

He also said her silence over the recently released audit report of the Nigeria National Petroleum Corporation, NNPC, by PricewaterhouseCoopers (PwC) is “deafening”.

The audit revealed “massive abuse of public trust and stealing of our common patrimony in high places under her watch and the government she serves”, Mr. Oshiomhole said.

Criticising what he called “latter day policy activism” by the minister, the comrade governor said apart from the subsidy regime, the minister must also come clean on some other critical issues that demand accountability from her.

“The question to ask is: how come that it is now, for the first time, that we are hearing from the Minister of Finance about fraudulent claims by the oil marketers amounting to billions of Naira? At what point did the Minister of Finance and CME realize that these fraudulent and similar claims are going on? When did it start? Is it just recently or it has been going on all along? These questions are pertinent because we know that if the Petroleum Products Pricing Regulatory Agency (PPPRA) were doing its work diligently, all claims by oil marketers would be vetted on a daily basis before their payments are processed by the Ministry of Finance. Hence, there should be no dispute about the amount due to oil marketers at any point in time.

“What the foregoing, therefore, suggests is that all along, PPPRA, the Ministry of Finance and the oil marketers have been involved in an unholy alliance, in the mismanagement of the fuel subsidy regime and in the process defrauding the nation of its revenues”, the governor said.

Mr. Oshiomhole said Mrs. Okonjo-Iweala, who is also Coordinating Minister for the Economy, cannot stop at simply shedding “crocodile tears” about fraudulent claims by oil marketers, urging her to ensure full disclosure by giving the full details of subsidy payments to oil marketers in the last four years, including the parameters used to calculate the subsidies.

“The recent nationwide fuel and energy crisis, adjudged the worst in the economic history of Nigeria, is merely a reflection of the gross mismanagement of the economy, which characterized Dr. Okonjo-Iweala’s tenure since 2011”, he said.

Mr. Oshiomhole said state governments, who are joint owners of the Excess Crude Account, were not properly briefed on the status of the account, and challenged the minister to shed more light on the spending from the account.