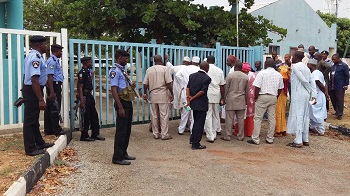 The gale of impeachment currently sweeping across the country appears to have reached Niger State as reports indicate there is a plot to impeach Governor Mu’azu Babangida Aliyu.

Apparently in a last ditch effort to prevent the plot from taking place, a detachment of police and members of the Department of State Security Service (DSS) took over the premises of the assembly on Tuesday as early as 6:30 am leading to traffic gridlock along Paikoro road.

Daily Trust reports that the alleged plot to impeach the governor was traced to some allegations of underfunding of the house for some months, which has made legislative work difficult in the state.

The newspaper quotes sources close to the assembly as saying the impeachment plot is not only targeted at the governor as it also includes the Speaker, Barrister Adamu Usman, who is alleged to have been conniving with the executive to render the assembly ineffective.

The members, who were denied access to the assembly on Tuesday, were forced to abandon their vehicles 100 meters away and trek to the gate of the house.

In a move reminiscent of the House of Representatives squabble with security operatives, who blocked entrance into the National Assembly during the height of Speaker Aminu Tambuwal’s defection to the All Progressives Congress, APC, The Niger assembly members too had to force their way in after they were initially stopped at the gate by the police.

In a telephone interview with Daily Trust, Clerk of the House, Abdullahi Kagara, said that he did not know why the police invaded the premises.

He also confirmed that he was denied access to his office.

When contacted, the state police commissioner, Emmanuel Amore, said the deployment of police to the state assembly was part of its proactive measure based on intelligence report to maintain law and order.