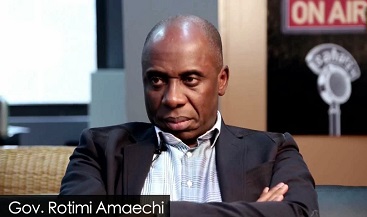 Civil servants and pensioners on Wednesday took over the Rivers State Secretariat in Port Harcourt to protest the non-payment of their salaries and pension arrears by the state government.

The protesters as early as 9am, had besieged the secretariat even as staff declined attending to anybody that sought their assistance at the secretariat.

The protest caused a gridlock for some minutes as they chanted anti-government slogans.

One of the leaders of the protesting workers, Mr. Tony Ochiagha, told journalists that the protest became necessary as a result of the two months salaries owed them by the state government.

Ochiagha noted that it was the first time in the history of civil service in the state that workers would be owed for upwards of two months, adding that the third month was already running.

The situation was not any better for pensioners as he disclosed that retirees of the state civil service were owed five months pension arrears.

Ochaigha said, “We are talking to Rivers State Government who is our employer. The Civil Service is the engine room and the platform on which every administration functions. So, why would they play on the impulse of the Civil Service?”

Also, the State Secretary of the Nigeria Union of Pensioners, Rivers chapter, Mr. Joseph Agbo, confirmed that pensioners in the state had not been paid for five months.

Agbo, therefore, urged Governor Rotimi Amaechi to pay them before leaving office, adding that apart from the five months being owed pensioners, other backlog of arrears such as the 14 per cent, 15 per cent and 38 per cent increases have not been paid, even when they have been computed and sent to the governor for action.

“Pension is a right and not a privilege. Before the governor came on board, salaries of civil servants and pensioners were regular, but all these are no more.

“We have, on six occasions, had demonstrations in the past over the anomalies and our members are dying without getting their entitlements”, he added.