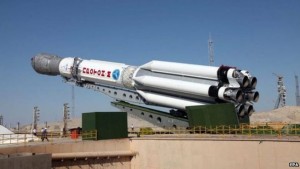 A Russian rocket carrying a Mexican satellite malfunctioned and crashed in Siberia, Russia’s space agency says. The Proton-M carrier rocket broke down minutes after it was launched from Kazakhstan on Saturday morning, the Roscosmos agency said. BBC has more:

The cause of the accident is being investigated, Roscosmos added. Russia’s space programme has experienced a series of mishaps in recent months, including the loss of an unmanned supply ship.

On Tuesday Russia was forced to delay the return of three astronauts on board the International Space Station (ISS) after the out-of-control cargo ship burnt up as it re-entered the Earth’s atmosphere on 28 April. Problems occurred about eight minutes into the Proton-M flight, which was broadcast live by Russia’s space agency Roscosmos.

“There has been a malfunction on board the booster rocket. This broadcast is now over,” the presenter said. Roscosmos said that “an emergency situation took place when the Proton-M rocket launched with a MexSat-1 satellite”. “The reasons are being identified,” the agency said.

Space industry sources say that the Mexican satellite has not been found and launches of rockets of the Proton type will be grounded until the reason for the malfunction is established.