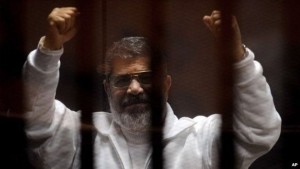 An Egyptian court has pronounced death sentences on ousted president Mohammed Morsi and more than 100 other people over a mass prison break in 2011. Morsi is already serving a 20-year prison term for ordering the arrest and torture of protesters while in power. BBC was there:

Egypt’s religious authorities will now have to give their opinion before the sentence can be carried out. Morsi’s supporters from his Muslim Brotherhood movement have described the charges against him as “farcical”. He was deposed by the military in July 2013 following mass street protests against his rule.

Since then, the authorities have banned the Muslim Brotherhood and arrested thousands of his supporters.  Morsi raised both fists in defiance as the sentences were given. He was one of more than 100 other defendants to be sentenced to death for their involvement in mass jail breaks during the 2011 uprising against Egypt’s then-president, Hosni Mubarak.

Morsi, who escaped from Wadi Natroun prison in January 2011, was accused of colluding with foreign militants in a plot to free Islamists during the mass prison breaks. Many of his co-defendants were Palestinians accused of being members of militant group Hamas, and were charged in absentia.

The court also issued rulings on another case, sentencing 16 Muslim Brotherhood members, including deputy leader Khairat al-Shater, to death on spying charges. Morsi, who also faces espionage charges, will be issued a verdict in that case at a later date.